Where to go for Halloween in the US?

Halloween is a world-famous celebratory event which takes place on 31 October every year for celebrating the feast of All Hallow’s Day. This day is of huge cultural as well as religious relevance for western Christians. Halloween commences with a 3-day long observance of Allhallowtide. This is the time when western Christians remember their deceased including both saints as well as martyrs.

In western culture, Halloween is the time when both adults and children come together to decorate their houses in the spookiest way possible, not to forget the immensely popular Guising as well as Trick or Treat customs. Especially for children, Trick or Treat is a custom which is religiously followed year after year on the eve of Halloween. In the United States, all cities participate with great zeal and excitement to celebrate this ghost festival. Spooky rituals, ghostly costumes as well as haunted tours prepare this nation for a day dedicated to the dead.

Most prominent Halloween celebrations in the United States

Village Halloween Parade in New York City is a phenomenal celebration which shuts down Manhattan in its urban festivities.

This mile- long parade was conceived in the year 1974 and its pageant puppets are custom- made every year for this one- day long annual celebration. If you are planning to become a part of this celebration, you can arrive early and reserve a spot for yourself on the 6th Avenue. 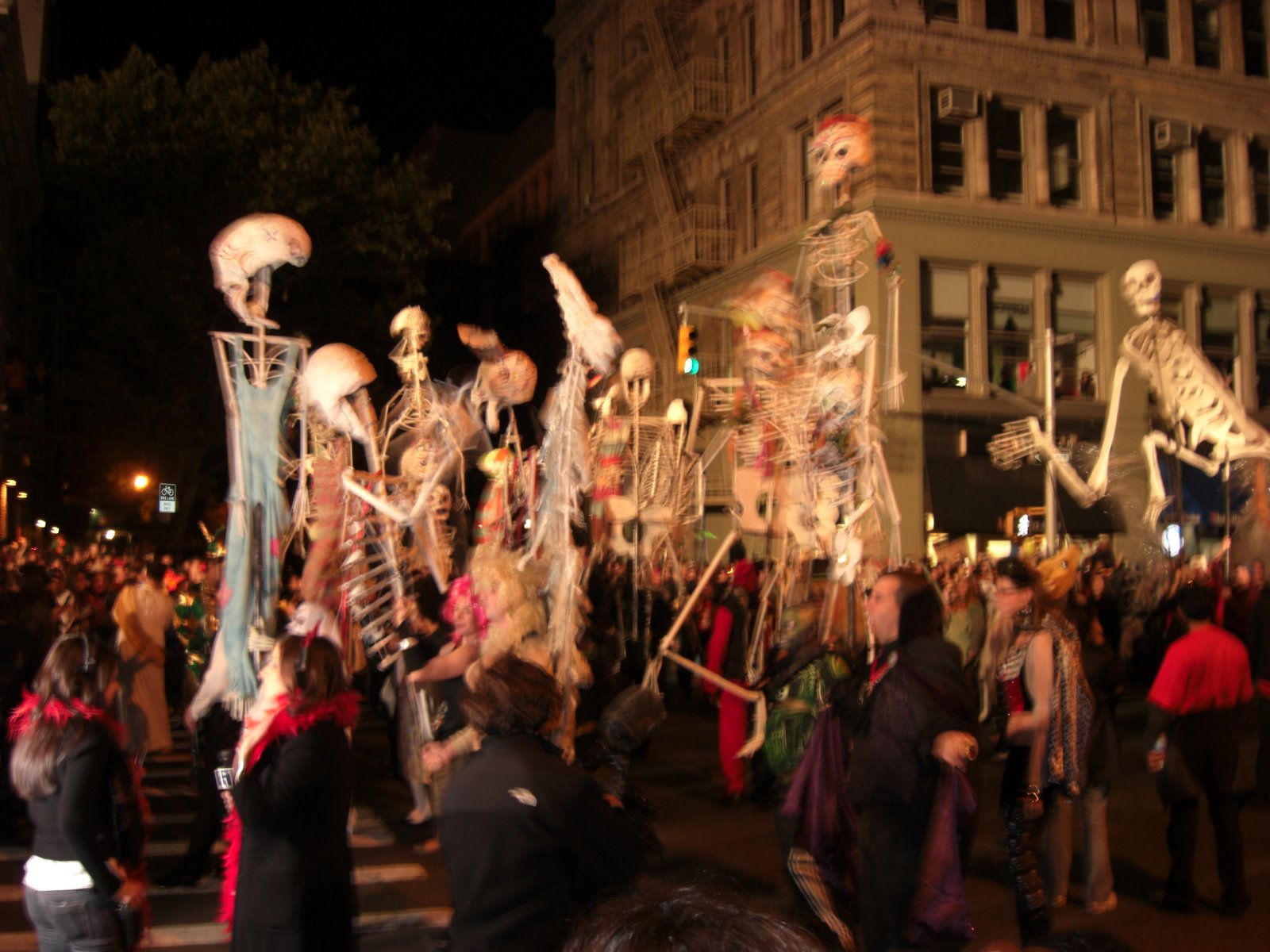 Festival of the Dead

Salem is a great place to celebrate the Spirit of Halloween with spooky events taking place for an entire month in memory of the dead. For 31 days, Massachusetts is ruled by macabre activities and attracts more than 500,000 visitors from all parts of the world.

There is Witchcraft Expo and Annual Psychic Fairs organized each day during the month of October which provides people with a way to interact with spirits through professional psychics and crystal balls. All the festivities conclude at the Salem Witches’ Halloween Ball which is organized at the Hawthorne Hotel. Here, hundreds of people gather in order to summon the spirits of Halloween and the ceremony comes to an end with drummers and special appearances from witch doctors. 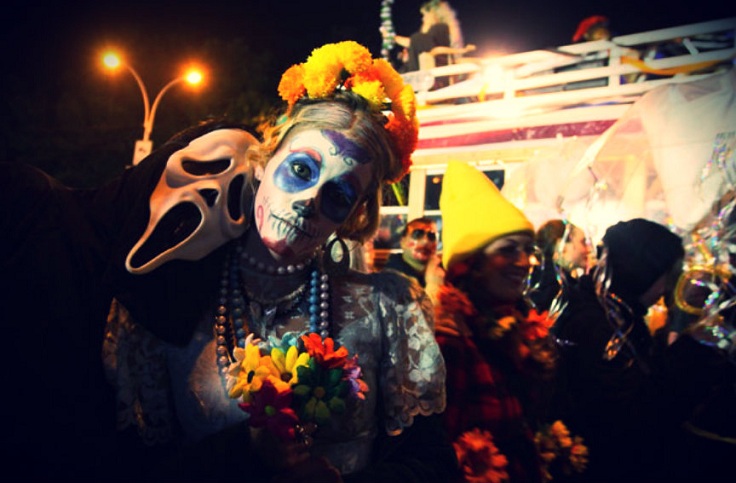 The district of Little Five Points is popular for being the hub of culinary culture and arts in Atlanta and also hosts the annual Little Five Points Halloween Festival as well as Parade. During this parade, there are food trucks as well as local kitchens setting up their stalls for the local public to come and savor on tacos, barbeque briskets as well as wood-fired pizza among other popular delicacies.

This parade lasts for around 2 hours. 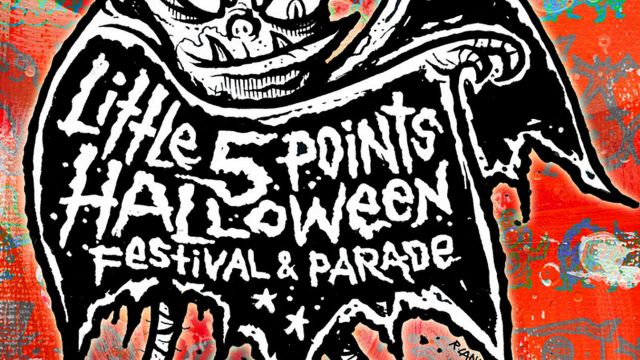 The largest Halloween Street Party in the world takes place in Los Angeles and it is known as the West Hollywood Carnaval. With more than 500,000 people coming out in the streets of Santa Monica Boulevard, the neighborhood comes to life with costumes and creativities which compete against each other for accolades as well as attention.

This evening comes to an end with the anointing of the “Queen of the Carnaval”. Every year, an A- list celebrity is crowned as the local royalty during this event and some of the renowned personalities who have held this position in the past include Rihanna and Queen Latifah among others. People visiting this Carnaval march across the entire stretch of the boulevard, with more than 50 musicians playing in the background across 6 stages. The vibrant and trendy bars along the streets attract the participants who stop by to take part in different competitions and to grab on some Halloween treats. 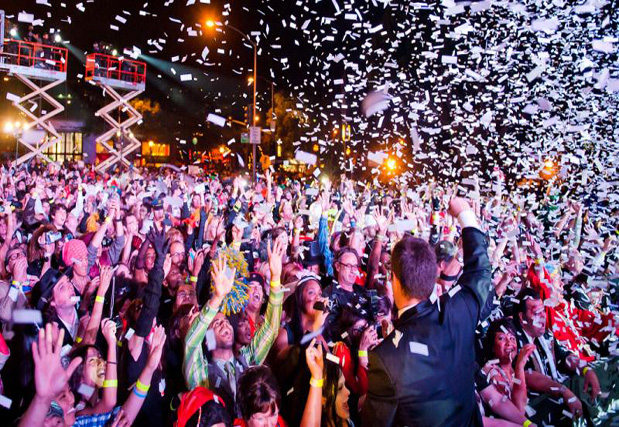 Manitou Springs is a small town located in the outskirts of Colorado Springs. This place is popular for its natural mineral springs (believed to have healing powers) and in the year 1889, Emma Crawford, a popular pianist, made her way to these springs in order to cure her Tuberculosis.

She dies in the year 1891 and since the year 1995, the inhabitants of this town started celebrating the Emma Crawford Festival in her memory on the weekend prior to Halloween. Coffin race is quite popular; here people dress up as Crawford and are pushed by 4 mourners in their wheeled caskets. It has gathered huge attention since its inception. If you are tired of the traditional ways of celebrating Halloween, Colorado Springs is where you need to head next! 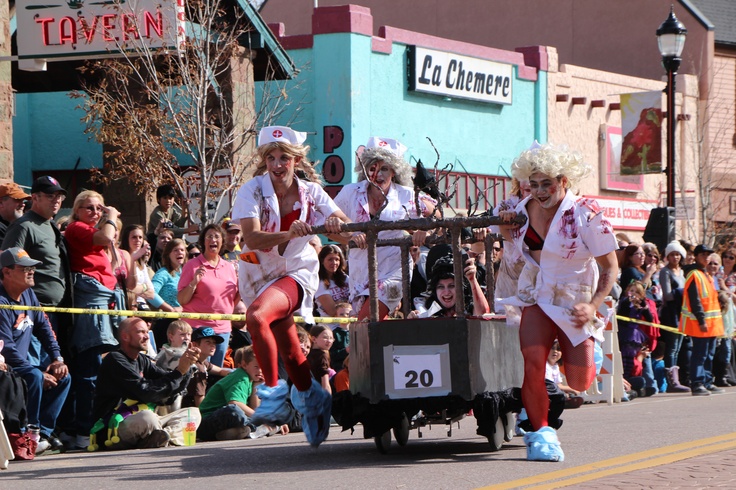 New Orleans is popular as America’s most haunted city and needless to say, the dead in New Orleans come to life during Halloween every year. Haunted tours are very popular in this American city where brave souls are brought face to face with the other side.

Here, the main Halloween celebration is held in the neighborhood of Faubourg Marigny, which is at a walking distance from the holiday showcase of the French Quarter. With booze and food flowing in full force across all stations and stalls in this city, Halloween is probably the most favorable time for you to come to New Orleans. 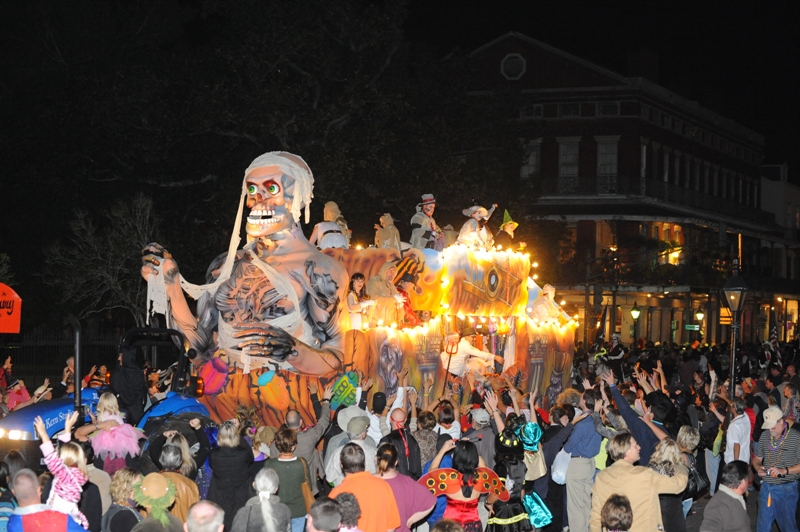 Kentucky’s Louisville Zoo takes immense pride in its annual Halloween celebration which is also popular as the largest Halloween party organized across the globe. During this time, the entire zoo is transformed into a Halloween themed hub and people of the town are invited for various activities.

With your favorite characters decked up across the entire length of the themed walkways, you can take pictures with characters from the Pirates of the Caribbean, Frozen, etc. It also provides you with a chance to trick or treat with the zoo animals as you take a round through the zoo on a train. Do not forget to watch out for the Headless Horseman, who can make the most unexpected appearances during this fun yet spooky tour. 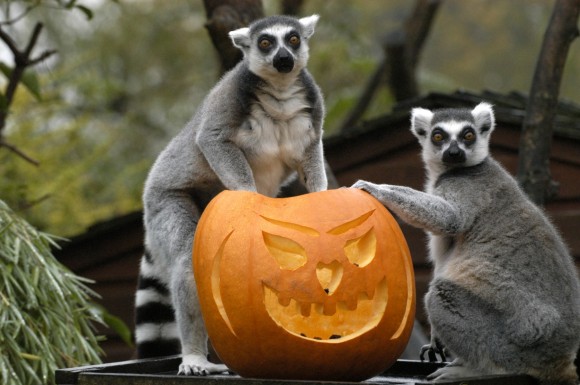 Las Vegas is known for its larger than life way of doing everything and the same stands true for its Halloween celebrations as well. Hundreds of people descend from the fancy high-end hotels and make their way across the entire strip in order to become a part of the celebrations in the most genuine way possible.

Halloween in Vegas is absolutely free of cost and here you can come face to face with some of the most inventive as well as articulate costumes which are not found anywhere else in the world during Halloween. If you want to experience the true essence of Vegas Halloween, head to the Circus Circus where this adventure theme park is transformed into a Fright Dome especially in honor of Halloween festivities. There are more than 6 haunted houses and asylums which add to the terror and horror in Vegas. 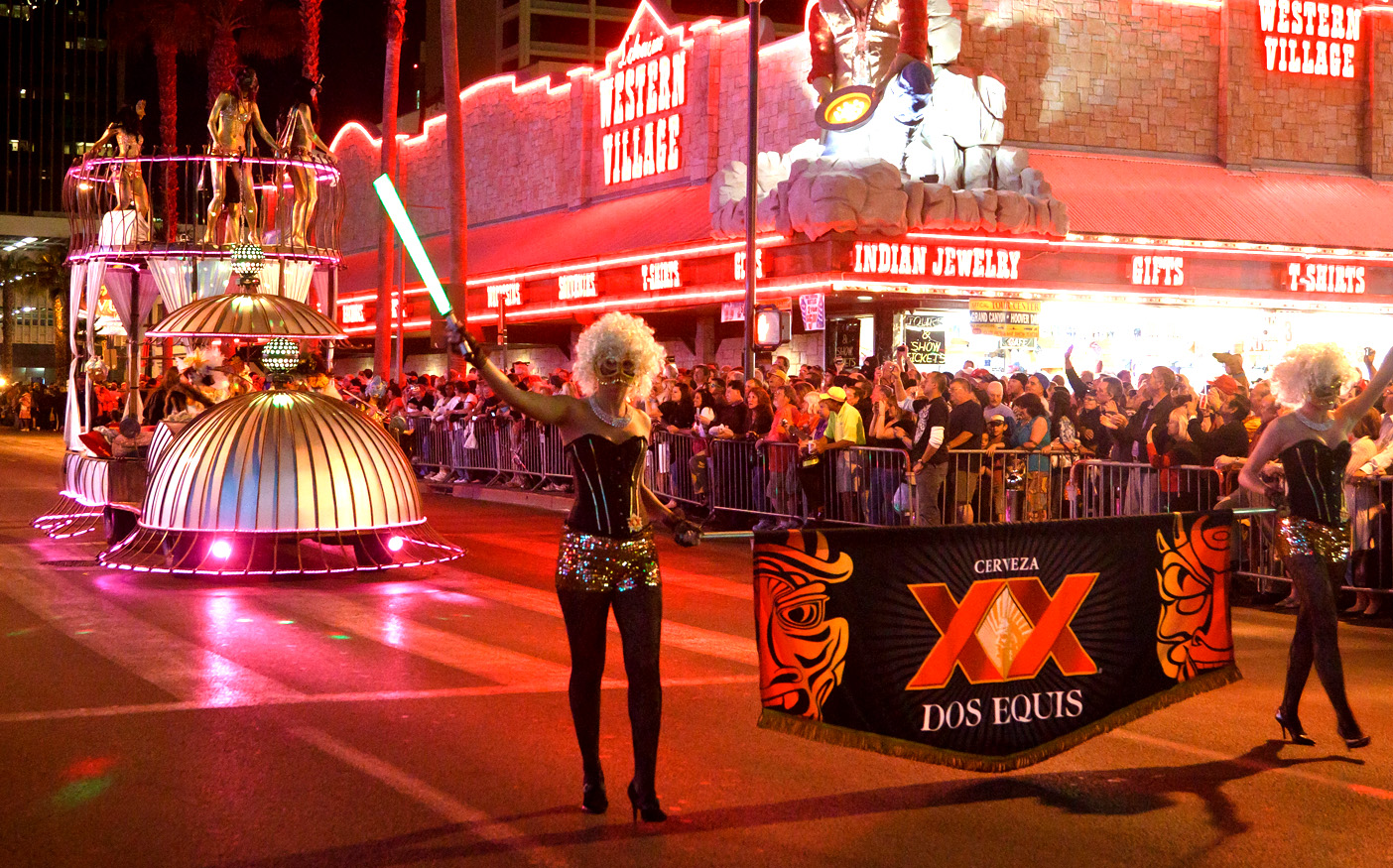 This annual Halloween parade floods through the streets and everyone is welcome to become a part of this parade.

Based on their costumes, the participants are divided into 5 different categories: scariest, drag, pet costume, best group as well as most original. In this parade, there are fire twirlers, marching bands as well as stilt walkers which are the trademarks ever year. This 0.7 mile long march covers a LGBT- friendly region of bars, clubs as well as restaurants. With lip- smacking specials knocking on the doors, this neighborhood comes to life when the parade reaches its conclusion point here. 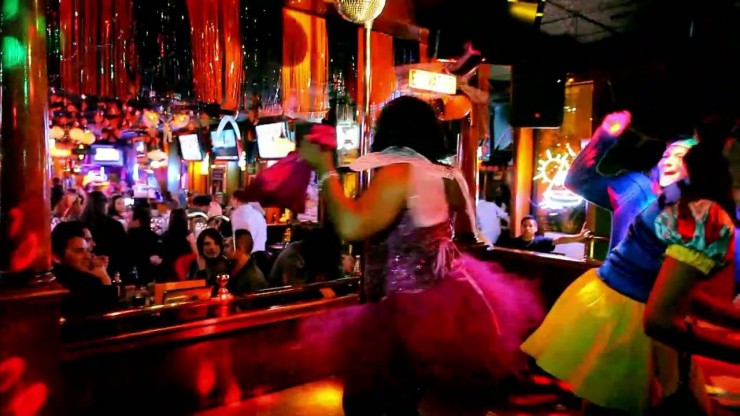 With a name as spooky as Sleepy Hollow, Halloween is undoubtedly nothing short of a homecoming for this neighborhood. Sleepy Hollow is the birthplace of Washington Irving’s Headless Horseman, the timeless hero who showed up during the nights. Halloween is a month- long event in Sleepy Hollow and there are hayrides, street fairs, parades and live music concerts which bring this town to life.

The haunted Sleepy Hollow cemetery invites evening lanterns when people get ready for the spookiest night tours. The crypt of the popular vampire Barnabas Collins as well as Washington Irving’s tomb adds to the terror of this cemetery. There are family- friendly haunted tours organized by the castle- dwellers in the Gothic Revival Lyndhurst Castle. There are several famed ghosts and spirits you are destined to meet along the estate tour of this castle including Dracula, the Wicked Witch of the West, Henry VII as well as Maleficent. 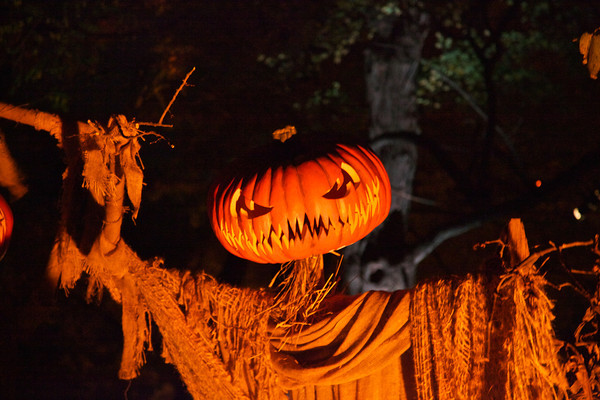